In less than three months, realme breaks into smart personal audio market in India with third spot in Q1 2020, according to Canalys

SHENZHEN, China, July 17, 2020 /PRNewswire/ — In less than three months since offering its AIoT products, realme has been confirmed as a market leader in the smart personal audio category in the Indian market for Q1 2020. According to Canalys, a research firm, realme secured a commanding third place with 10% market share, an achievement for a new entrant amidst a global pandemic. 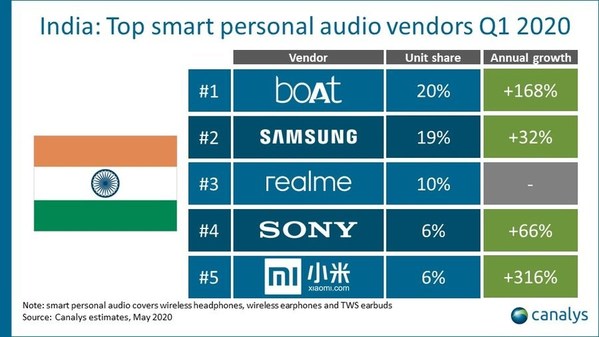 realme breaks into smart personal audio market in India with the third spot in Q1 2020, according to Canalys

Latest Canalys estimates show that shipments of smart personal audio devices in Asia Pacific, not including Greater China, grew 61% year on year to reach 16 million units in Q1 2020. Asia Pacific has surpassed Europe to be the third largest regional market in the smart personal audio category. The region now accounts for 21.1% of global shipments and demand is set to grow further, due to the increase in demand for smart phones in growing economies.

In discussing about the results, realme noted that there was an opportunity as key players globally were not fast enough to adapt to growing consumer needs. realme revealed that the majority of its consumers are youths and young professionals, who value form as much as function. “This means we have to deliver on both fronts to meet our customers’ needs”, says Xu Qi, realme’s Global Marketing President.

realme’s tech-trendsetting range of products incorporate the best in both design and technology. The Buds Q earpieces were designed by José Lévy, who has worked with brands such as Hermes. realme’s world-class design studio has attracted top designers wordwide such as Naoto Fukasawa, Jose Levy and more. realme plans to bring more designers from the US, Japan, Korea and Europe to infuse their works through realme products for a global audience.

The smart audio market is a fast-evolving market, with new features such as 5G and AIoT being experimented with in new products. As such products become cheaper and more reliable, consumers are becoming open to relying on technology for their daily needs. “Accounting for more than half the market, wireless earphones are the most popular category in India, with all the top five players, including smartphone vendors Samsung, Realme and Xiaomi, shipping more wireless earphones than any other category in Q1,” said Canalys Analyst Madhumita Chaudhary.

realme found success through deeply understanding their customers and being responsive to their needs. Recently, realme broke the record in selling smart TVs in India – they sold 15,000 smart TVs in just 10 minutes. realme has also announced their plan to release more than 50 AIoT products by the end of 2020 and more than 100 in 2021, to a global audience of more than 50 different countries and regions. With a strong lineup of products and a deep understanding of its markets and consumers, realme has ambitious aims to be the leader for consumer AIoT products on a global scale.

realme is a technology brand that provide superior quality and trendsetting smartphones and AIoT products to the global market. realme users are young, ambitious and globally minded. realme products empower these people to ‘Dare to Leap’ using the latest in technology and design.

Ridesharing App OBHAI On WhatsApp – A First in Bangladesh