Skip to content
PrevPrevious Related NewsHancom Group Enters the US Home Robot Market
Next Related NewsWondershare MirrorGo: Manage your Phone from a ComputerNext

Marking the 45th Anniversary of Sino-Thailand Diplomatic Relationship, His Excellency The Ambassador of the Kingdom of Thailand in China visits TCP Red Bull’s global “House of Brands’ Booth at the 2020 CIIE. 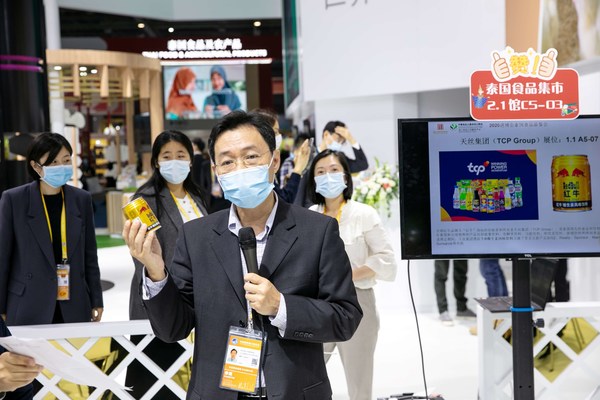 SHANGHAI, Nov. 7, 2020 /PRNewswire/ — For the second year running, TCP Group, the inventors and owners of the Red Bull brand and trademarks globally, is showcasing its Red Bull products and the diversity of its global “House of Brands” product portfolio at the China International Import Expo (CIIE) in Shanghai.

H.E.Mr. Arthayudh Srisamoot Ambassador of the Kingdom of Thailand in China visits the TCP booth at the 2020 CIIE

TCP’s booth displays some of the best offerings from its global ‘House of Brands,” such as hero product Red Bull® Vitamin Flavor Drink, which brings China’s consumers the classic taste of Red Bull. Other food and beverage products on exhibit include Ready (one of the most popular premium energy drink in Thailand), Sponsor (currently the No. 1 electrolyte drink in Thailand), Mansome (Thailand’s first and top-selling functional drink for men), Sunsnack (sunflower kernels), and functional drink G2.

TCP Group CEO Mr. Saravoot Yoovidhya said, “TCP is delighted to once again bring our exciting line-up of food and beverage products to Chinese consumers at CIIE. At last year’s flagship event, we launched the latest addition to our global ‘House of Brands,’ Red Bull® Vitamin Flavor Drink, which our Chinese fans have enthusiastically embraced ever since. Our success in the market in China is also thanks in part to the fantastic platform that CIIE always provides for facilitating product debuts.”

TCP’s dynamic presence at CIIE is the latest example of the group’s ongoing rapid expansion in the Chinese market. In May this year, TCP unveiled its plans to invest 1.06 billion RMB in China over the next three years. This investment will help to further expand TCP’s domestic business by supporting its local partnerships, establishing a new representative office, in-country team, and manufacturing centers as well as supporting the launch of innovative products from its global portfolio.

Mr. Yoovidhya added, “We’re also proud to be attending CIIE during a milestone year for the China–Thailand diplomatic relationship and Red Bull – as this marks their 45th anniversary! China has always been front and center in our ambitions as a leading Thai company to bring the very best that Thailand has to offer to the whole world. More than two decades ago, my father, Mr. Chaleo Yoovidhya, first introduced Red Bull to China by setting up the first Chinese Red Bull factory in Hainan province, my family’s ancestral home. Red Bull quickly became the most popular beverage in the Chinese market. China has become the NO.1 overseas investment market for us. TCP hopes to continue to cultivate the Chinese market with concrete actions and investment, add more vitality to the trade, investment and business exchanges between the two countries, as well as enable continued friendship between Thai and Chinese people.”

“Today, I’m honored for us to be forging ahead on that incredible journey at CIIE, working closely with our valued customers and partners as China leads the global economic recovery from the pandemic. Heading into next year, TCP is highly optimistic about the future prospects for the Chinese market, and we look forward to continue bringing the very best of Red Bull to our local fans.”

The TCP Group is one of the leading food and beverage companies in Thailand, with a diverse product portfolio comprising four product categories – energy drinks, electrolyte beverages, functional drinks and snacks – and more than 30 product lines under nine brands. This includes Red Bull, the world’s leading energy drink, which the company’s founder Mr. Chaleo Yoovidhya invented in 1975. The TCP Group is the only producer of the Red Bull flavor around the world ensuring only quality ingredients are used in Red Bull worldwide. TCP, together with the Yoovidhya Family, own the Red Bull trademarks worldwide. Mr. Chaleo established Hainan Red Bull Energy Drink Co. Ltd. in 1993, in Hainan province, the birthplace of his father. China is the Yoovidhya Family’s ancestral homeland, and their Chinese family name is Xu (许). Hainan Red Bull manufactures Red Bull – named Hong Niu in Chinese by Mr. Chaleo – for the domestic market. In response to the drink’s increasing popularity, Mr. Chaleo and his family established Red Bull Vitamin Drink Co. Ltd. (RBVC) in 1995 with other shareholders in order to serve Red Bull to Chinese consumers nationwide. In September 2018, following the expiration of RBVC’s joint venture term, TCP decided to launch new partnerships and a new business model in order to continue providing quality, legal Red Bull products to the vast number of Chinese consumers as well as ensure Red Bull continues to be one of the most popular drinks in China today.